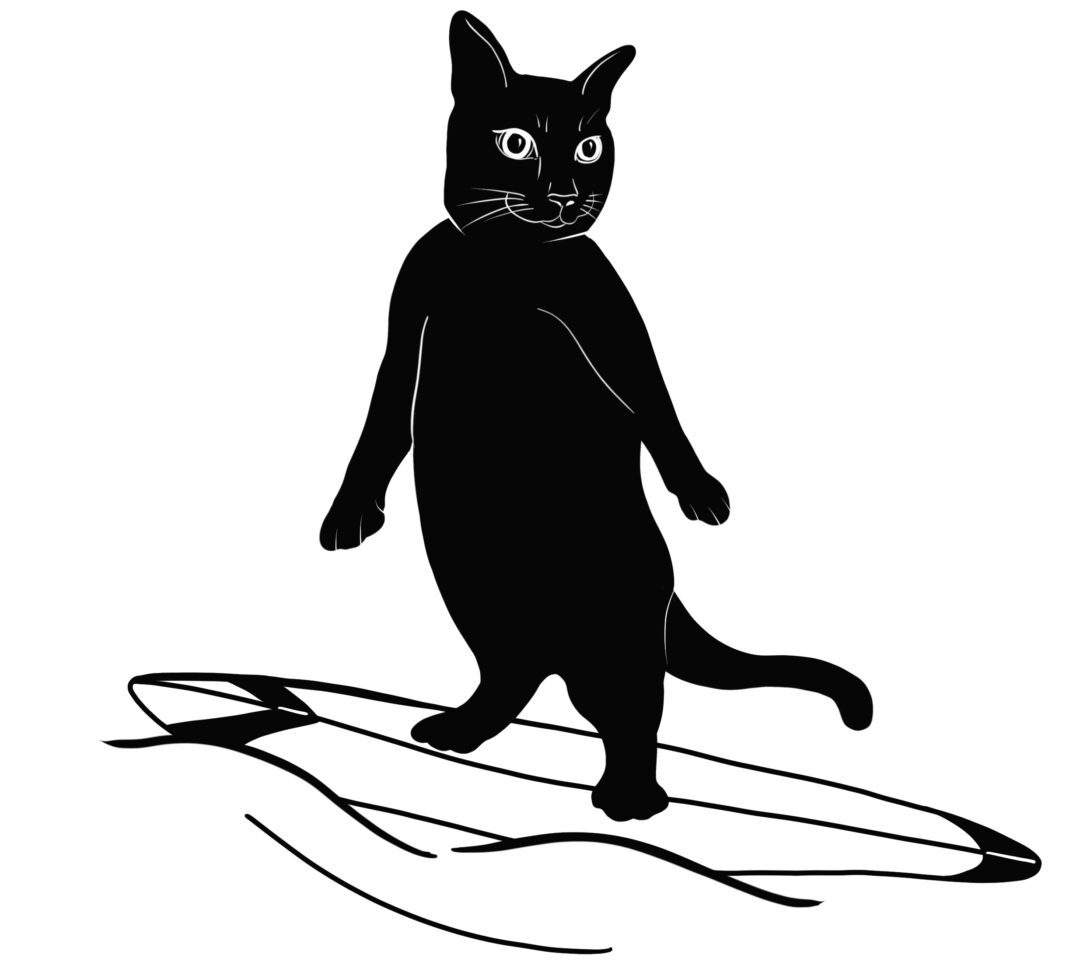 mostly me, by penelope 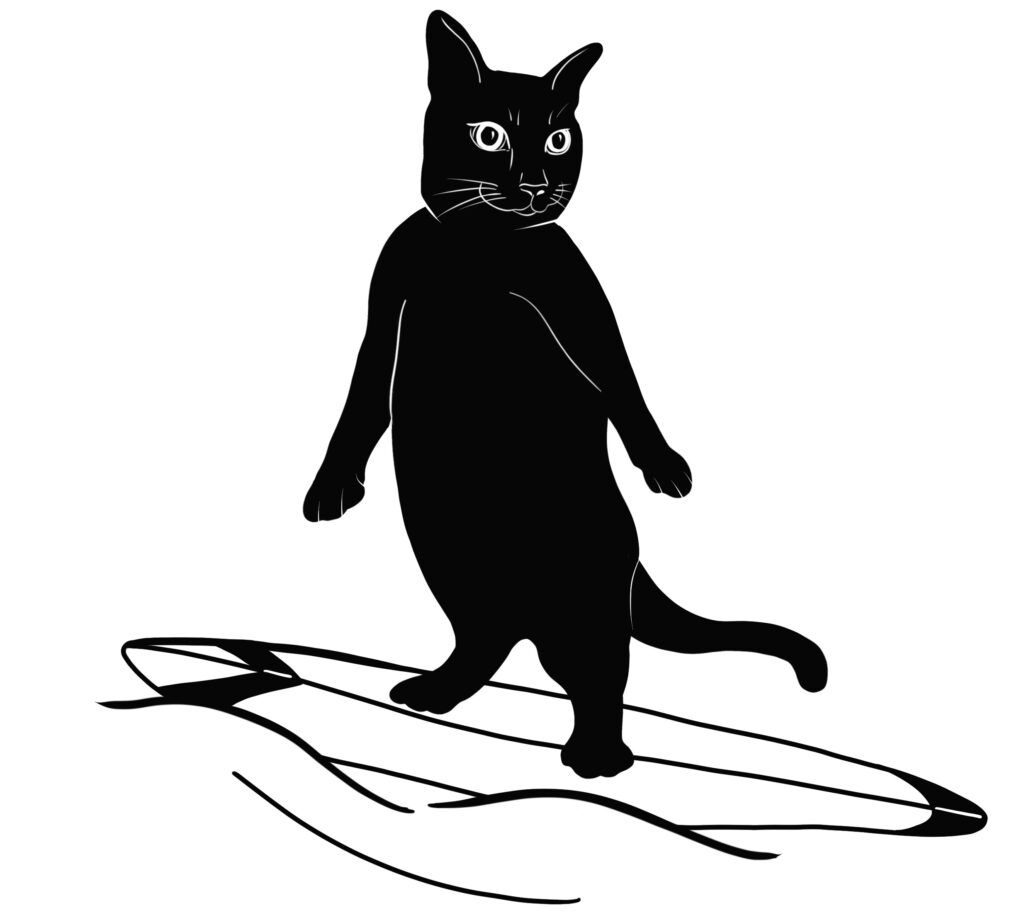 Will Penelope’s new adventure have her swimming with the sharks? …

Marcy and Cynthia are vehemently arguing over whether pleated “barrel pants” are a legitimate fashion trend or the coming of the the third apocalypse. 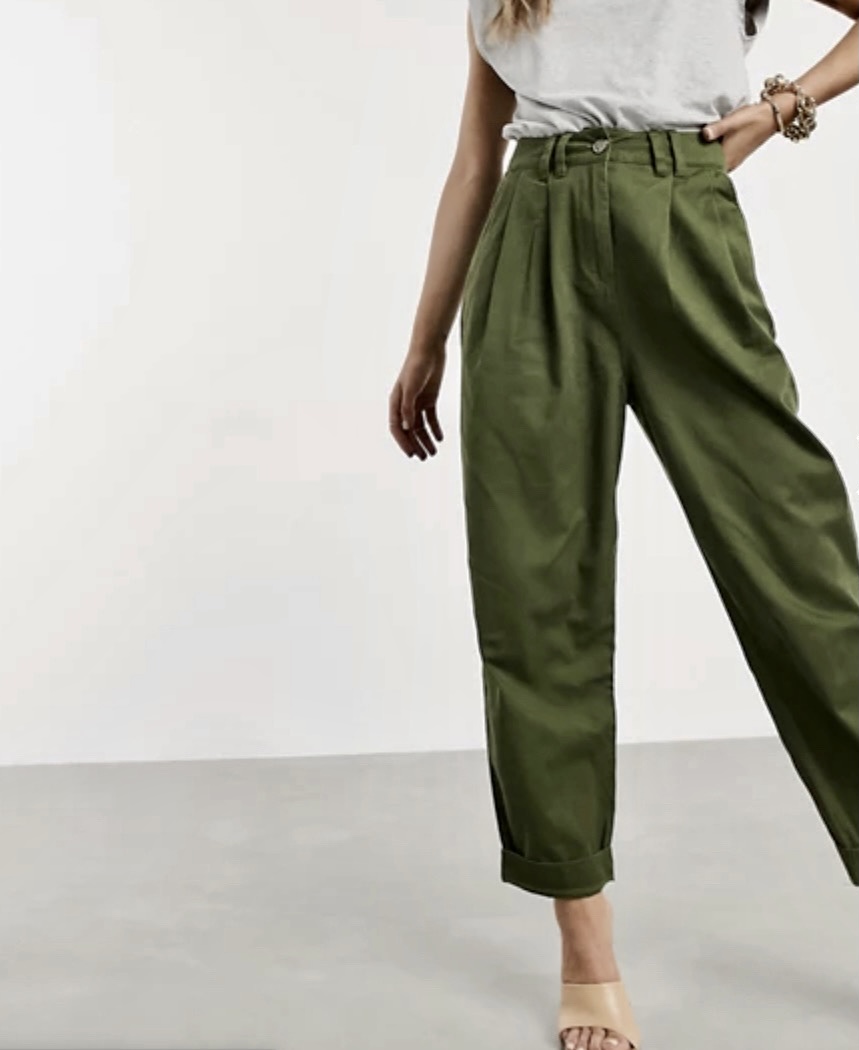 Penelope walks in carrying a surfboard under her arm and chatting on the phone.

penelope kitten (hanging up):  hokule’a, the surfing cat, invited me to hang ten this summer in honolulu. 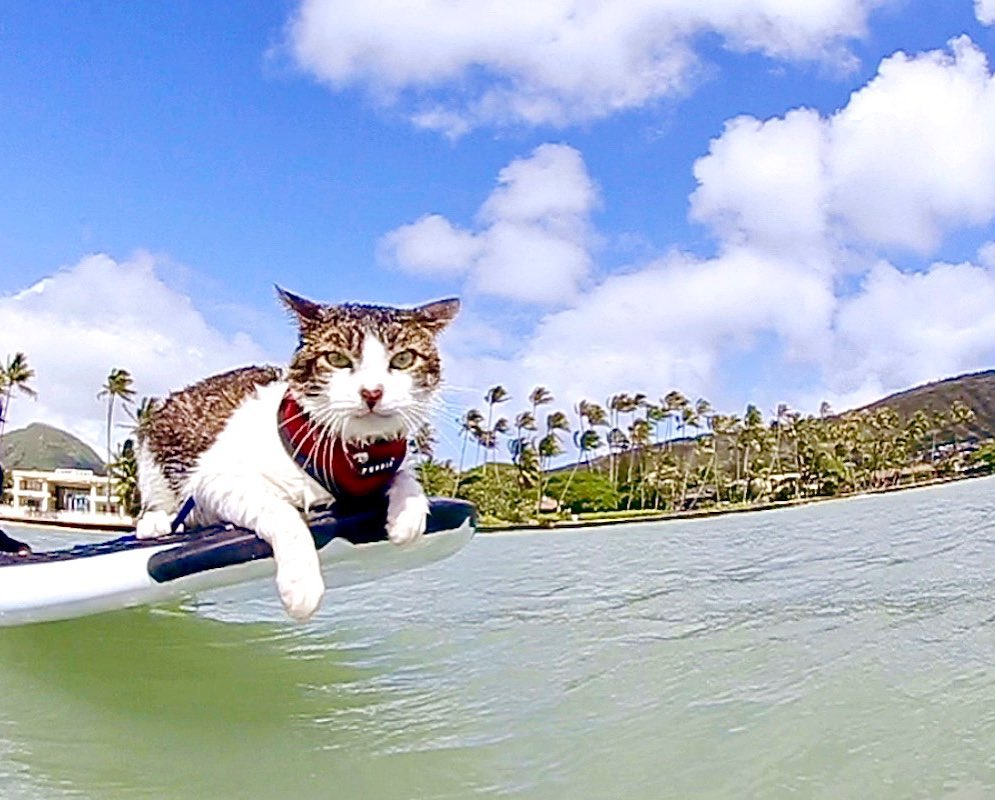 Cynthia:  Ohhhh … a vacay in Hawaii. Count me in.

Marcy:  What?! I’m not a hippie veg head. I deserve my meat.

penelope kitten (apologetically):  um … so sorry … hokule’a is looking for aggros only. unless you can shred a gnarly wave with an aerial or an a-frame… i don’t think you two are invited. i’m sorry. maybe next time.

Penelope Kitten exits with her surfboard and her board shorts and her snorkel.

Cynthia (waving back):  Ok. Be careful. Don’t talk to any sting rays or jellyfish. They aren’t your friends.

Marcy (angrily calling after her):  I hope the “men in grey suits” aka “sharks” mistake you for a seal.

Marcy: What? I’m mad! She just UN-invited us to Hawaii. And anyway sharks aren’t going to mistake a pudgy black cat on a surfboard for a seal. 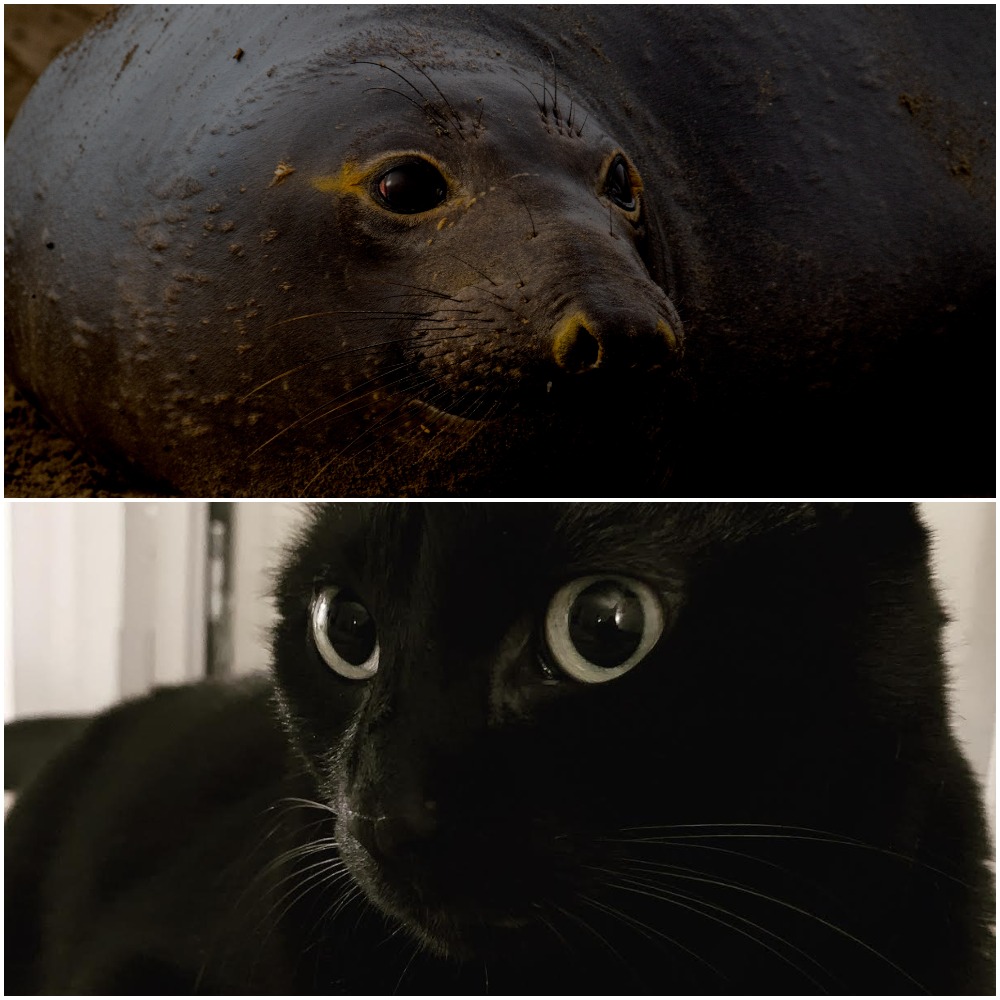 Marcy and Cynthia scream and race out the door to save Penelope from the sharks.

They almost catch up with her as she heads west on Santa Monica Blvd. towards the beach. But, before they do, they pass out from exertion in front of the Carl’s Jr.

Penelope Kitten hooks a left and continues towards the paddling pool at the local park.

Will Marcy and Cynthia discover that Penelope is hanging ten in the West Los Angeles kiddie pool?

Will they try the new meatless hamburger at the Carl’s Jr before setting on their way?

Will they corral Sean Penn and his gang of aging surfer bros to search high and low for a pudgy black cat in board shorts hanging ten off of Zuma Beach only to get arrested for indecent exposure after accidentally ingesting magic mushrooms from Gary Busey’s secret stash?

Close up of Marcy and Cynthia in a jail cell. They are sprawled out, giggling, and still high off the mushrooms.

mostly me, by penelope | thank u 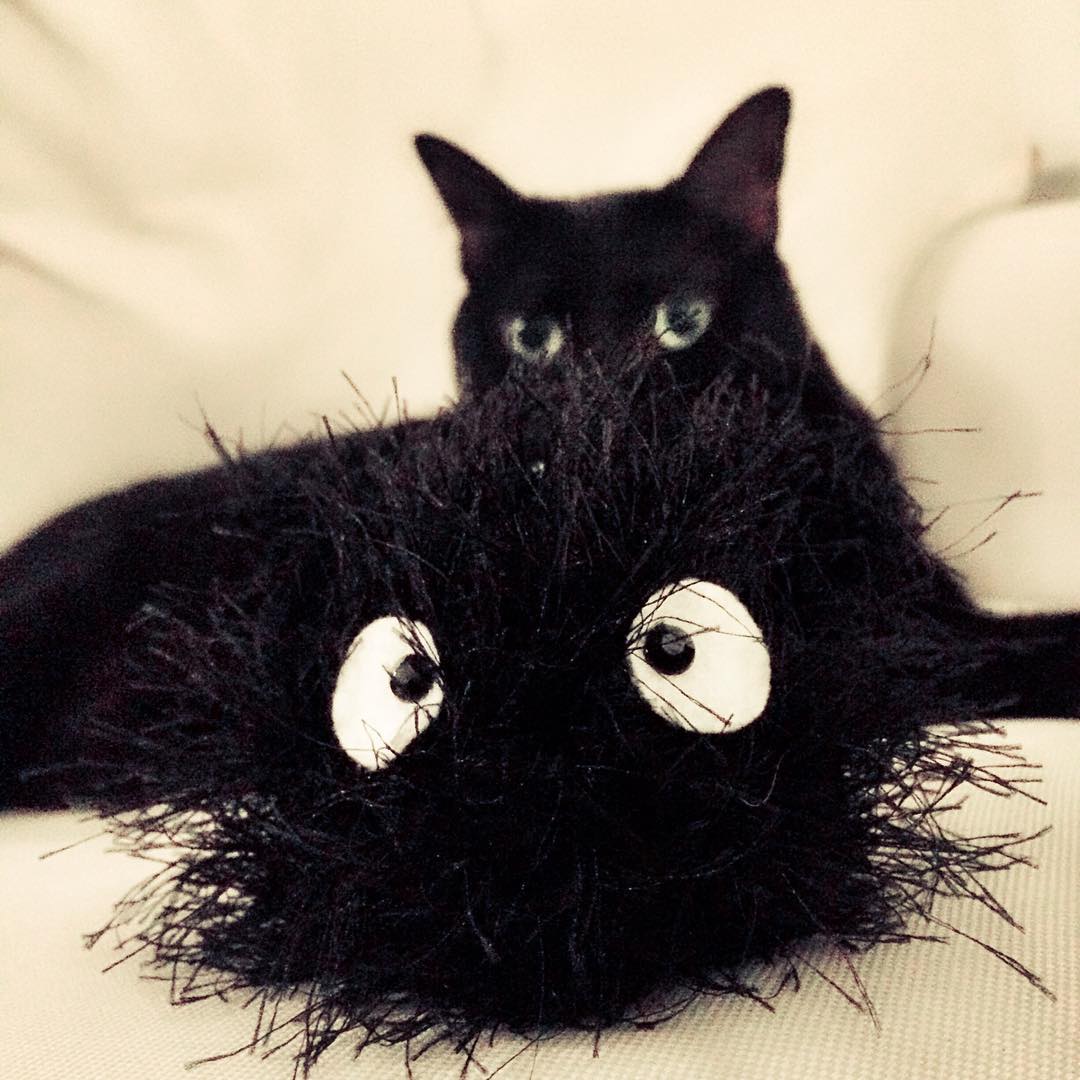