Styling The (Not) Wives Of Pancho Villa: Revolutionaries, Lovers, and Hollywood Producers

Cynthia:  Well, here we are at the final installment of our series about costuming Telenovela Wives of Pancho Villa, a new play by Jeffery Atik.

Cynthia:  Here we have the revolutionaries, Osvaldo and The Colonel, who we put in donated flower button down shirts, plastic bandoliers from a costume shop, and $5 cowboy hats from the famous Olvera Street in downtown Los Angeles.

Cynthia:  The Colonel was played by the talented and subtlely hysterical, Katrina Nelson. The skirt and boots are her own.

Cynthia:  Osvaldo was played by the sweet and talented newcomer, Tiago Ferreira. Look out for Tiago! This former soccer player is going to be famous.

Cynthia:  Next up are the Hollywood Producer, Mr. Thayer, and his assistant, Maria, played by another great comedy duo of Steven Christian Amendola and Heather Pasternak. In the play, the character Maria is everybody’s servant. Below, is Maria The Maid.

Cynthia:  And here is Maria The Hollywood Production Assistant. Both of the actors, Steven and Heather, supplied their own clothing for their costumes, with the exception of the apron which I got on ebay for $8.

Marcy:  Shhh… it’s against union rules for actors to supply their own costumes.

Cynthia:  You shhhhhh… or we’ll end up in jail like Senora Torres and Fernanda.

Speaking of jail. Here is the famous killer/sociopath of the Mexican Revolution, Rodolfo Fierro, played to scary and humorous perfection by David E. Frank. In a costume culled entirely from his own wardrobe.

Cynthia:  And last but not least are Pancho Villa and his New Wife, played by super duper awesome Achilles Molina and the lovely and funny Lexi Tess.

Cynthia:  I got Pancho’s shirt from Jet Rag for $8.72. Those flowers on the shirt are hand painted.

Marcy:  You forgot something.

Marcy:  Yes you did. The ugly dress from El Paso!

There is a running joke in the show about a crazy dress from El Paso. It had to be bigger than life and the actresses who wore it needed to feel Ah-Maz-Ing in it. I thought it would take forever to find but I walked in to Jet Rag and there it was, “the ugly dress from El Paso,” staring at me from an end cap. We put it on Marta and that was it. We looked no more. It was $52.

Marcy:  You forgot something else.

Cynthia:  I could never forget Bo. I just don’t have a picture right now.

Cynthia:  I know! I know! He wore a $5 hat from Olvera Street, David’s black shirt, and his own khaki pants and shoes. He looked great.

Marcy (indignantly):  He looked better than great. He is the most handsomest man alive. How could you, Cindy? How could you?

Cynthia:  Yeah well, the play is over.

Marcy exits with a suitcase filled with Friskies.

She comes back once she realizes no one will give a ride to a diva feline lugging a suitcase full of stinky cat food.

Marcy:  I guess I’ll vacation on the couch.

Marcy:  Tell Freddy not to wake us up until August.

Marcy and Cynthia zonk out.

Freddy:  Wake up!  Woo hoo! Your play got extended.

*Check out  Part One, Part Two, Part Three, and Part Four of our series about costuming Telenovela Wives of Pancho Villa. 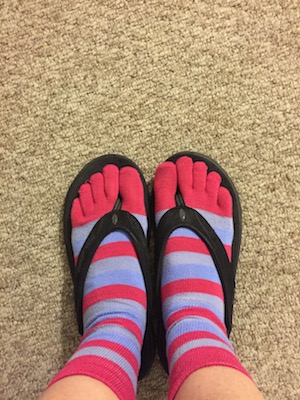 Dear Marcy: Can I Wear Striped Toe Socks With My Flip Flops?