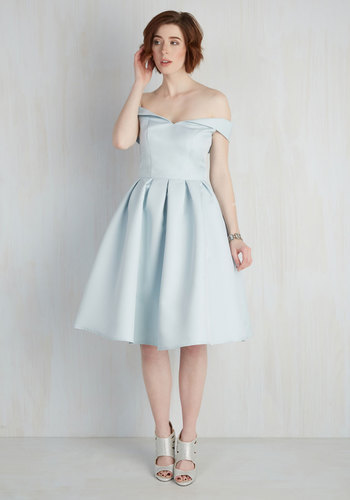 I can’t be the only one still obsessing over 500 Days Of Summer fashion! Can I? …

Cynthia:  Okay so I know it’s been 7 years since 500 Days Of Summer was released into indie movie theaters around the globe and we all became obsessed with Summer Finn’s wardrobe but –

Cynthia:  I know. I know. It was a looooong time ago. But I realized that for the past seven years I have been trying to acquire Summer Finn’s wardrobe. I am constantly on the lookout for that ’70’s style aline denim skirt.

The blue sundress from the record store scene.

And, of course, her beautiful gauzy pale blue dress from the wedding scene.

Cynthia:  And I suddenly realized that I’ve been looking for these items because – all of a sudden – I’m seeing them in stores!

Cynthia:  Seriously! Check these out!

Cynthia:  Could it be that the 2016 is the year I finally get to dress like the character in the best non-romantic romantic comedy of all time?

Marcy: Probably not. I take it you haven’t looked at the prices on some of the Summer-like clothing.

Cynthia:  Oh. Hmmm. Well, you know… maybe these styles will be so popular that the lower end retailers will make similar Summer-like clothing and we can afford in 2017!