Cynthia:  Marcy, our relationship troubles with Robin Thicke’s disgustingly sexist but super catchy song, Blurred Lines, are now resolved thanks to a group of law students at Auckland University. They did a feminist parody of his song that is just brilliant.

Cynthia:  Yes. We can now replace his song with their parody and no longer feel bad about enjoying great music with misogynistic lyrics/video. Even if YouTube takes down the parody again – which they did once already today –  the Law Revue’s lyrics will forever be etched in our heart and brain.

Marcy:  You mean we won’t go down that shame spiral and want to kill ourselves due to the overwhelming guilt we feel at loving his music but despising the lyrics and video.

Marcy:  You mean we won’t want to projectile vomit a giant hairball every time we hear Robin refer to women as good girls or beasts.

Marcy:  You mean we won’t get those violent impulses to lurch at a guy with an axe every time we see the women in his video parade around like vapid, stupid, naked, simpletons (with a goat!) while three fully dressed men do stuff to them that is quite frankly demeaning.

Cynthia:  Yes. We don’t have to be sad about Blurred Lines anymore because it has been replaced by these Fantastic Awesome Smart Funny Women! Watch.

Marcy:  With their cats, of course.

Rachel Beller Is The Cat’s Meow 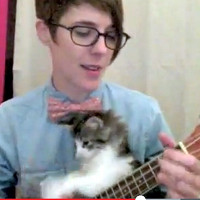 We Less Than 3 The Nerdy Love Song (with a kitten)