Cynthia:  Woo hoo! Congrats to the cast and crew of Getting A Head (a new play by Jeffery Atik, and presented by our theatre group, Portable Currency) on a fantastic weekend of performances!

Marcy (pouting):  Yeah yeah. So the acting was sensational, the direction was stellar, and the writing was superb. Whatever.

Cynthia:  Why so grumpy?

Marcy:  The costumes were only okay.

Cynthia:  Awwww… I think you did a great job for under $100. And anyway, we only needed to suggest the costumes, not create a literal interpretation.

Cynthia:  Oh stop it. Let’s look at your highlights. Here we’ve got a young Queen Victoria as played by the voraciously versatile actor, Olivia Cristina Delgado.

Cynthia:  This dress and two petticoats were found at Goodwill. What a score! I thought Queen Vicky’s costume would be the most difficult and it was the easiest.

And here we’ve got Steven Christian Amendola as Charley “Chinese” Gordon (a famous British martyr) and Olivia as a murderous boy, Suleiman.

Cynthia: She’s wearing her own black top and pearls, and I got this navy blue Jessica McClintock skirt at a thrift store for $7.

Marcy (excitedly):  That’s Marta from the last play we costumed – Telenovela Wives of Pancho Villa. I love Marta. Do you think she’d let me be her kitty?

Cynthia:  She does love cats but –

Marcy races off to pack a bag and head to Marta’s.

Cynthia:  Our actor, Muneeb Rehman, found this suit at a thrift store some time ago and was waiting for the perfect time to wear it. Lucky for us it was our play!

Marcy races out the door with a suitcase full of Friskies.

Cynthia:  Marcy! Come back! We’re reopening Telenovela Wives of Pancho Villa in two weeks at Theatre Asylum in Hollywood and need to find a Santa hat and a few more costumes…

Marcy Got Hired As A Costume Designer! Again!

Styling The Wives Of Pancho Villa 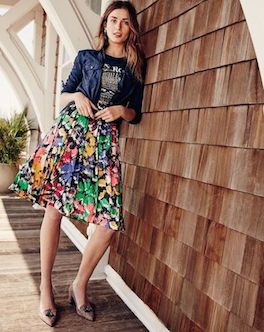 New in Cat Clothing for Humans